Attended a session at the Pune International Literary Fest that had a lot of fireworks. Gems like "Authors don't have a clue about what they are doing" and "Why aren't people walking out? Most readers are kind and forgiving" were flying around through the session, thanks to Shatrujeet Nath. I forgot the books that he has written - I think some fantasy about Vikramaditya Gathas is one of them. But the session was great fun, with the authors ranging from serious to the comic. (note I said authors, not their books. I have read only one of the four, Harimohan Paruvu -spelt wrongly in the leaflet!)  Anyway, this was my debut as an attendee at any lit fest, and I must say you can learn something from attending one. For one, it's free, and you get to see a variety of people, from the celebrities to the intellectuals to the pretenders (and some real authors too). The hall was packed, and some might say it was due it being air-conditioned, but they could be wrong.Hari spoke about the craft of writing and how it gets better with more writing. Ankita shared her emotions at being cut to size (her novel, rather) by her editor, and so did Shatrujeet. He had written two books instead of one, he sportingly admitted. There were comments baout rejections (around twenty is par for the course?) and about research involved in writing even fiction, to make the background authentic, and it was a lively discussion, well-moderated by Vasudev Murthy. 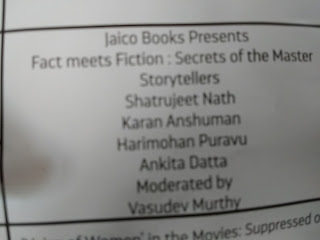 Another highlight of the event after this one, was a panel with film women, of which Pooja Bhatt and Ashwiny Iyer Tiwari were the highlights. Ashwiny recently directed two good films, and was of the view that directors are back in business rather than stars. I certainly hope so, and look forward to more films like Bareilly ki Barfi and Nil Battey Sannata, the two good films that she did.

I liked a quip from Pooja Bhatt about growing up with Mukesh Bhatt who is a baniya and is not interested in changing the world, and Mahesh Bhatt, the maverick. She also spoke about how women in Bollywood are asked to keep their opinions to themselves or be like Tanuja who was sidelined (they boasted). Pooja's response was that she admired Tanuja, and did not mind being like her at all.
at September 09, 2017