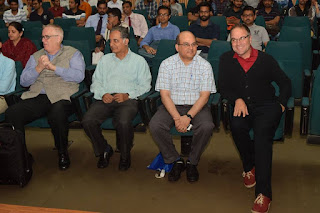 A pic from the inaugural day, with Phil Zerrillo (left), and Stefan Haves (right), who gave us a brilliant example of how to connect with an audience/customer. Rishikesha Krishnan, director, IIM Indore and I are also in the pic.

The conference concluded yesterday, and a lot of lessons were learnt (yes, we used Digital Marketing to promote it too). Sheer energy and teamwork among many people led to its great success, and invited speakers were eloquent in their praise.

Thanks to the overwhelming response from researchers, we had a problem of plenty. Out of over 400 submissions, we selected around 300 for presentations. Managing so many in multiple tracks in two days was a big challenge. FPM students and Academic Associates chipped in, and media and photography were managed superbly by the able Ananya Mishra.

Hats off to the team of Veenus Tewari and her gang (as I like to call it) of girls and guys..and thanks to all our sponsors who saw it turn into the big event it became. Raji Srinivasan and Manoj Agarwal from NASMEI helped in multiple ways, and I discovered many people who were connected with MBA, a market research company and a former employer of mine, founded by 3 IIMA alumni.

Maybe as a symbolic coincidence, the IIM Bill 2017 was passed by the Lok Sabha (Indian Parliament's lower house) as the conference was on.
at July 29, 2017