We had a lot of time on our hands in my years of growing up. We probably had a lot of physical activity too, but this post is about the time we spent thinking about things, when we were not playing, studying, or watching movies-in theatres. 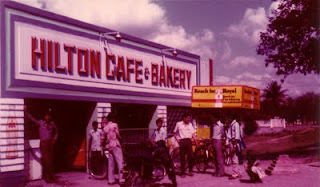 One of our think-tanks in engineering college, Osmania University. 1977-82.

Most likely, thoughts also included finding the love of your life (maybe not, maybe you thought you had already found her/him with every new crush), owning your own car and going on an adventure (it IS an adventure, come to think of it, on our city roads), owning a Badminton court so you could play without interruption ( a friend from college in Hyderabad had this ambition of having a Billiards Table in his basement and playing with Me!).

The world of thoughts is not constrained by reality, and is positive at all times. To this world!
at March 14, 2018